A leaky, mud-roofed, one-room log cabin schoolhouse called The Union School opened near the corner of 12th and Black.

The one teacher was O.J. Goldrick, and thirteen children attended. Families arriving by wagon train considered the existence of the Union School a great selling point to settle in West Denver.

The Union School moved to a log shingle one-roof building at 14th and Market.

The school grew so fast that another teacher was hired.

School District One was created, and the first school board was elected for East Denver Schools. 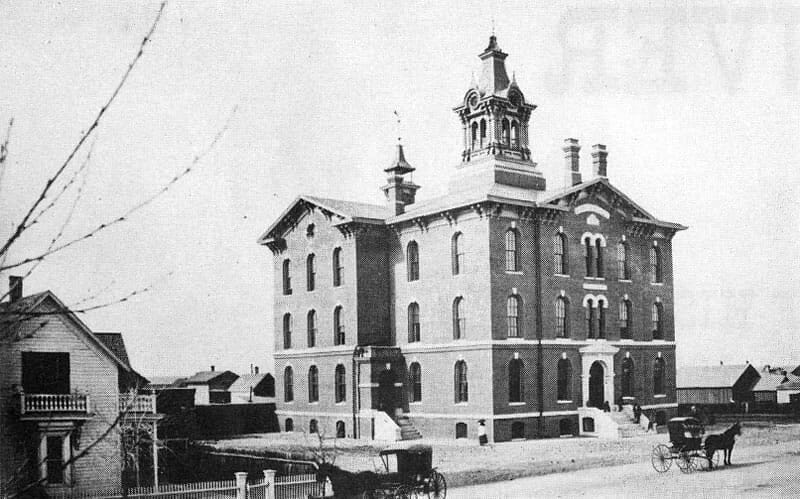 Arapahoe School opened on Arapahoe Street between 17th and 18th.

A large bell once called students to class – now, it sits on the south lawn at East High.

The building was only used for nine years; as downtown Denver business encroached and property values increased, the property was sold in 1882 for $165,000. The building became part of the “Club Building” at 1731 Arapahoe Street.

James H. Baker arrived from Maine to be the first principal of the High School section of the Arapahoe School.

This is considered the beginning of East High School.

Thirty students, seven of them seniors, voted for school colors.

They selected carmine and white (carmine was the only colored ink available at the time). Later, the carmine was shortened to red.

The high school needed more room, so the school board purchased land on Stout Street between 19th and 20th. 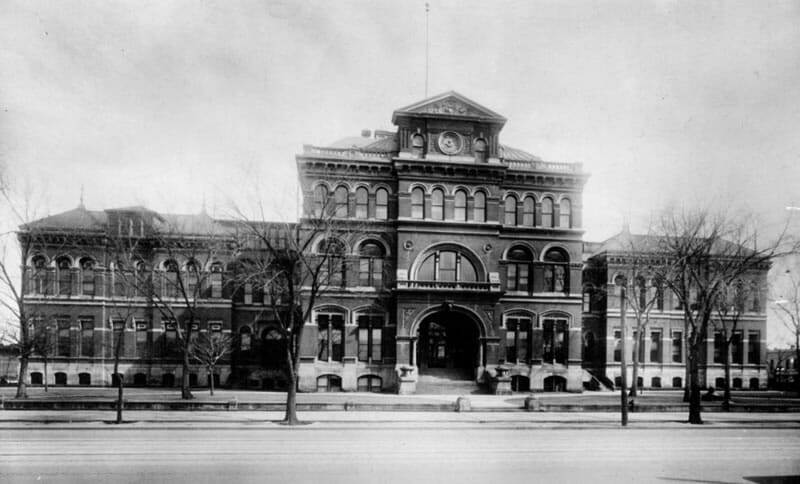 “Old East,” on Stout is completed.

The school could accommodate 700 students.

The school featured a gracious flight of stairs leading to the entrance, which was notable for its sculpture of the face of a young girl.

School architect Robert S. Roeschlaub and the school board decided to use a local childhood beauty instead of a Greek face to symbolize the school’s “dedication to youth.” The sculptor was Preston Powers, famous for his statue of the Indian on the grounds of the state capitol. Five thousand little girls across the city were visited as part of a campaign to find the model for the face. Six-year-old Ella Catherine Matty was selected. The statue was so lovely that those who saw it said that the artist could not have chosen a better model had he been able to have an angel pose. The result of this observation was that all East High students since have been called Angels. When “Old East” was demolished in 1925, the keystone was removed and placed in the rock garden at the “New East.” A replica of the original “East Angel” is located on the second floor of the school.

As East became more crowded, Manual High School was built for students who wanted to take up one of the trades. 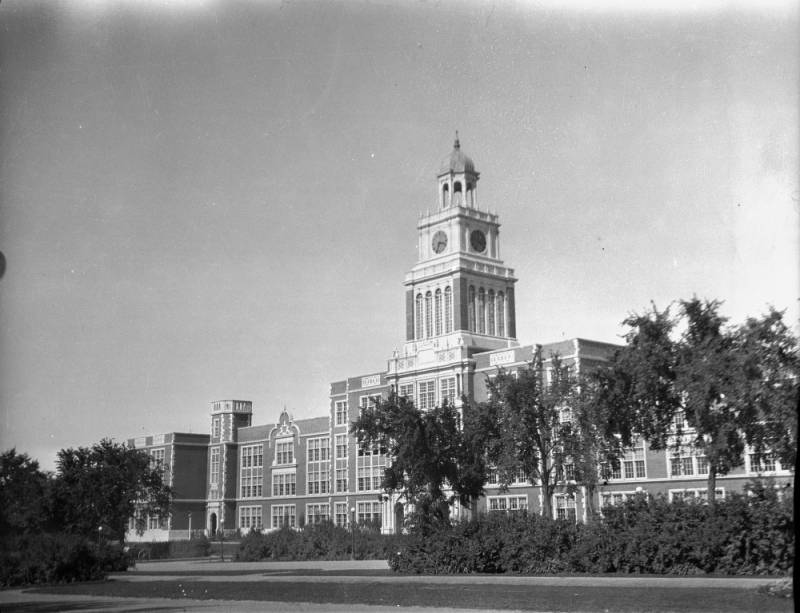 The school was built as part of a citywide effort to modernize and beautify public buildings, streets and parts called the “City Beautiful” campaign.

The architect was Denver native George Hebard Williamson, an 1893 graduate of the “old” East High. He won national recognition for his design of the “new” East, which was considered a model for modern and efficient school facilities as well as an aesthetic contribution to the surrounding community.

The architectural style of the building is known as Jacobean. The style is associated with the early 17th century British halls of learning, as well as the American colonial period. The most famous example of this style is Philadelphia’s Independence Hall, the site of the signing of the Declaration of Independence in 1776. The tower section of East is reminiscent of this important national monument.

The most visible feature of the East High building is its clock tower. At its highest point, the East Tower is 162 feet high and is visible from over a mile away. The clock weighs over a ton and each of its faces is nine feet wide. Its elaborate workings still keep reasonably accurate time after more than three-quarters of a century.

The massive four-story exterior of East High spans 417 feet at its front face. It is constructed of mottled red brick with light terra cotta decorative trim Of particular note is the emphasis on extensive window treatments, which were designed to provide maximum light to the students inside.

The auditorium was originally designed with pale amber windows on either side, which were boarded over due to fire regulations in the 1950s. It was considered state of the art in its lighting and sound systems in the 1930s, and incorporated space for organ pipes that were never installed.

The third floor library is decorated in original gray oak woodwork and illuminated Elizabethan ceiling. The historic Marco Polo mural was painted by artist Hugh Weller during the Great Depression of the 1930s, as part of federal New Deal public work programs.

In early 1991, the East High building was declared an official Denver Historic Landmark by the Denver Landmark Commission and the Denver City Council, with the enthusiastic support of the Denver School Board and the East community of alumni, friends, students, parents, and staff.

Whether you are here in Colorado, living in another state, or even another country, we want you to stay connected to East High School.